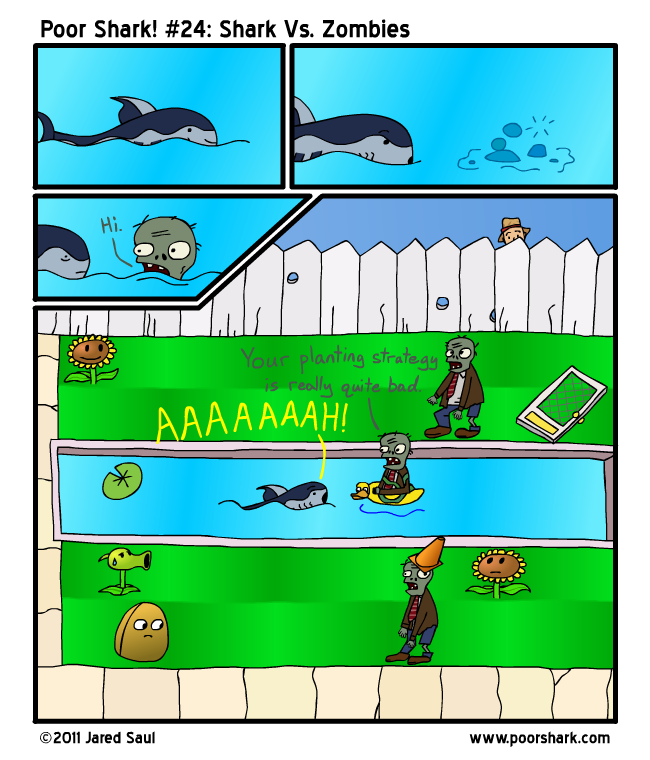 [Crazy Dave] You know, they used to call me “Fog Man” [Crazy Dave] ’cause I would hang out in the fog and JUMP OUT AT PEOPLE!

Plants Vs. Zombies is a much better game than I thought it would be.  (I guess that’s why I saw it referenced at least twice at Strange Loop 2011.)  I played way too much Desktop Tower Defense years ago, so I never wanted to play any tower defense games again.  Then came Comet Crash, because I got it for free via PS+.  And a few weeks ago they gave us Plants Vs. Zombies, too.  Turns out it’s a heck of a lot of fun!  It’s original and imaginative and better yet you steadily unlock new things to do as you progress through the game, instead of getting all of it up-front.  On top of that, the soundtrack never ever gets old!  (I learned yesterday that you can buy the OST on Bandcamp for $4.  I kid you not, I looped “Brainiac Maniac” 96 times while creating this comic.)

In non-game-related news, you may have noticed that I’ve been tweaking the site a little more this week.  For one, there’s a spiffy new header image up top to replace what was otherwise plain colored text.  Additionally, there’s now also a Links page.  I plan to add extra stuff to it later such as my Twitter account, but for now it boasts a nice helping of excellent webcomics.  If you ever find yourself thinking “Man, I have so much free time, I wish I knew of some good webcomics to read,” then just head on over to the Links page and that should keep you busy for, oh, about the next two weeks or so.