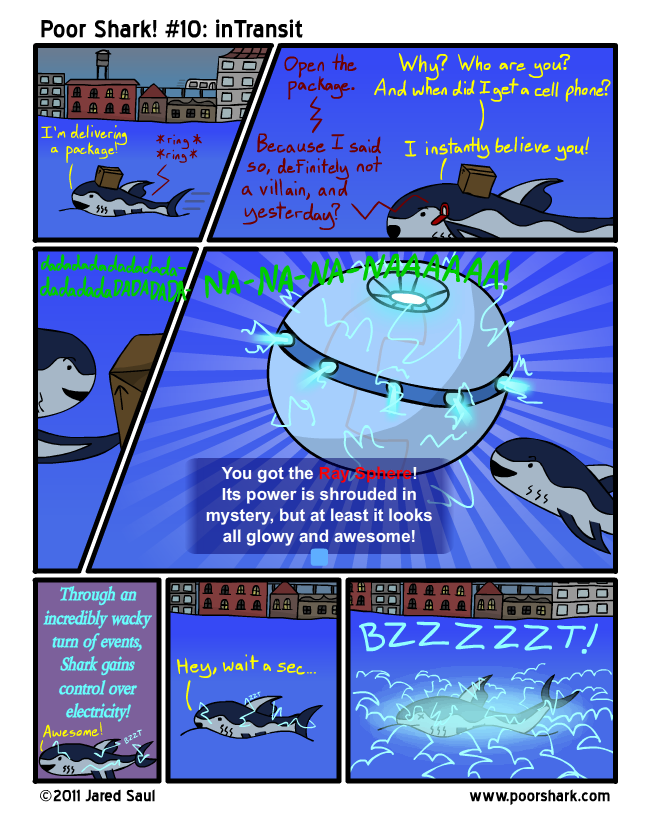 [Kessler] Well, that didn’t work as I expected.

As many of you have already noticed, I spent my July 4th holiday upgrading the site to use WordPress/ComicPress.  In many ways, it’s pretty awesome.  It’ll upload comics even when I’m asleep, the comments and RSS are built-in, and the permalinks are much more self-explanatory than “comic010.php”.  Still, there are things I wish I could change.  I miss doing random quotes as the main header, but when I tried that here, the quotes are what showed up in the Archive, instead of the comic title.  There are other things to tweak, too, style changes and subtle stuff, but I haven’t quite figured out the best way to do it, yet.  (When I told it to remove the sidebar from a page, it just moved it over a few hundred pixels to the left, instead.  I figure it out eventually.)

While I’m rambling on, I might as well give my opinions on the two games I finished this week.  I finally platinumed inFamous on Thursday, I think it was.  It would have been Wednesday, but I’ll be honest, finding my last two blast shards took me 2+ hours, blech.  It was a pretty nice game, and the control scheme, which I absolutely hated at first, turned out to be pretty solid when I was jumping from ledge to ledge later.  The whole option to choose to be good or evil was an interesting addition, although it didn’t have much of a purpose if you weren’t trying to go entirely good or entirely evil.  It was interesting to watch how people reacted, though, based on what you picked.  On my good playthrough, everyone practically crowded me all the time, exclaiming “It’s really him, can you believe it?  Check it out!” into their cell phones and then using their camera to take pictures.  And on the evil playthrough, all they want to do is kill me for great justice and/or humanity.  Finding the blast shards might’ve been easier if every other person I passed didn’t always yell “WE CAN TAKE HIM” and start throwing rocks at me.

The other game was Comet Crash.  I got it for free from PS+, not having a clue as to what it was.  Turns out it’s only my favorite tower defense game of all time.  Seriously, I’ve played a lot of tower defense games from no-lifing Kongregate a couple of years ago, and this one is just an amazing breath of fresh air.  You don’t get money for defeating enemies; you get money from comets that fly overhead, when you grab them and redirect them towards your laser grid.  You don’t get attacked by X amount of equally-spaced “waves”; you get attacked whenever the enemy builds enough units (which you can see the current count of) and decides to mount an offensive.  You don’t win by surviving these offensives, but rather when you defeat the enemy by building your own units and sending them.  You have a base, the enemy has a base, and the first one to have his or her base destroyed loses.  It’s like tower defense meets a real-time strategy game or something.  There are just enough units and buildings to keep every game interesting.  Oh, and I forgot the best selling point: you can play every story level co-op with up to two friends.  (Also there are dozens of battle mode levels where you and up to three other people try to defeat each other instead of an AI.)  It was simply an amazing game, and I’d be hard-pressed to find a tower defense game I’ll ever enjoy more.  (Though Bubble Tanks Tower Defense was a nice second.)

Although through all of this, I’ve stopped to think: I got inFamous for free from the PSN’s Welcome Back program, and enjoyed it so much I’ll surely be buying inFamous 2.  Comet Crash was a gift, too, as it were, and it didn’t take me long to realize I really wanted to buy its expansion pack as well.  Whatever Sony’s marketing scheme is, it’s WORKING.